Boris is hiding away in Chevening in Kent – a 115-room mansion, while Chequers is done up… who knows how much that is costing? Its probably cheaper than paying for cladding to be replaced on tower blocks. There owner occupiers who purchases their leases in good faith are having to foot the bill for replacing dangerous cladding, bankrupting some.

Meanwhile storm after storm sweeps across the nation flooding areas never flooded before and also inundating many who have been flooded our once or twice in the last decade. Where is Boris? Warm and cosy in his ‘Grace and Favour’ temporary home showing little grave and only favouring those who stumped up the cash that put him in office despite his long history of mendacity and racist remarks. 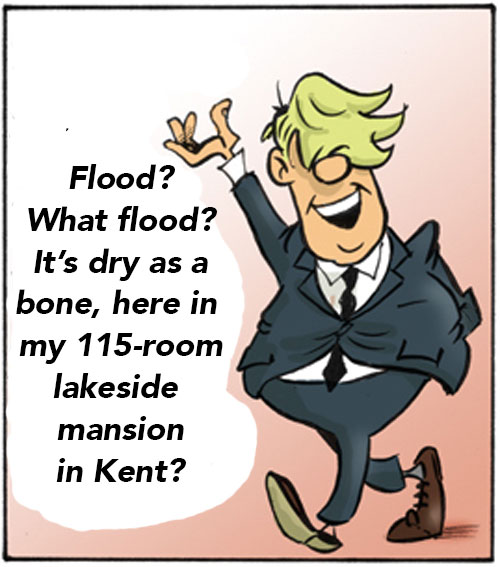 Has there ever been such a politician – probably. Britain has a long history of those who only care about themselves and staying in power, who make sure that their clique’s nests are feathered at the expense of us peasants – many of them the product of paid for education at Eton. Us peasants were more concerned about stopping Europe from dictating to us. Instead we effectively elected a dictator whose majority is so large he probably recons on having a decade to run roughshod over us plebs.

I met an Etonian once he genuinely believed that his class were born to rule and were a race apart.

He once told me he hadn’t changed his socks in weeks, and when I raised my eyebrow he said “People of my class don’t smell!”

Boris only ever wanted one job and now that he has it he treats it just like he did all the others… mendaciously. He’s been in office weeks now so is probably bored leaving the day to day ranting to advisors and other deeply cruel and witless colleagues.

Talking of which Priti Patel our new Home Secretary seems singularly inappropriately named as her policies and treatment of staff is far from pretty! You wouldn’t want to meet the Foreign Secretary down a dark alley and the rest seem to me to be as intellectually challenged as they are wealthy – I really don’t like my ministers to be how I like my drinking chocolate – rich and thick!

I really, really hope that those of you who voted this lot in will quickly wise up to the fact they will not just ruin the workers but could even impoverish a lot of their friends who will soon have no one to pay starvation wages to.

With the number of showers we have in power it’s no wonder the country is drowning.

Spread the bad!
This entry was posted in Uncategorised. Bookmark the permalink.
Skip to content